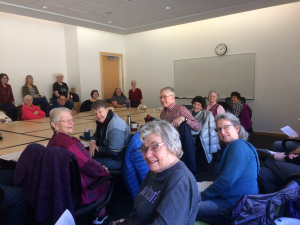 Here, we offer a variety of ways to learn and evolve.

Learn to read and understand Hebrew—mastering the language of the Jewish people. Or, attend scholarly lectures by acclaimed intellectuals about current global issues.

At Kehillah, you’ll find multiple ways to connect with, and make a difference, in your community. From that comes the best part: enduring friendships.

*Will return Spring 2022 at the Chelsea Theater

Through five incredible documentary films, Duke Associate Professor Shai Ginsburg will take participants on a unique tour of Israel. Several film screenings will be followed by evocative, honest discussions. Tugging at your heart and your mind, these films are not to be missed.

Always been curious about Judaism? Never paid attention in Hebrew school? Thinking about joining the Tribe? This class, using the Miller Program, is an open and engaging 18-week experience geared towards both Jews and non-Jews who want to learn more. Bring your questions and explore the wisdom, depth, and joy of Jewish living. No classes will be held on 9/23, 11/25, 12/23, and 12/30. Makeup dates reserved on 2/3 and 2/10. Follow this link for more information or to register.

Prayer-book Hebrew-Date Change!
We are now meeting on Tuesdays starting on January 13 at 7:00 pm to 8:30 pm. We will meet via Zoom. This course will be taught by Rabbi Robin Damsky. The fee for the course is $54. We need 5 students in order to offer the class. We have 4 students & we need 3 more. Please RSVP by January 11 to Sherri for Zoom info.

How we got here? – An Economic Perspective

Professor John Komlos leads us in our next installment of our Heart, Soul & Mind Series! The accumulation of anxiety during the past four decades led to the dysfunctional political system. The frustration was fueled by failed economic policies that advocated trickle-down economics that failed to trickle, deregulation that ended in the financial crisis and that did nothing to mitigate the humongous rise in inequality. Dai, Dayenu – that would have sufficed to destabilize any political system, but there was more: namely technological unemployment as well as hyberglobalization. And they all weighed most heavily on one segment of the population: the low-skilled, less-educated white men who felt that the elites had betrayed them. This failure of economic policy of historic proportions led to the fraying of the social contract. I argue that one would be hard pressed to understand the insurrection of January 6th without understanding these decades-long economic processes through six administrations. To join the conversation email sherri AT kehillahsynagogue.org.

Happiness is knowing there is a cake in the oven!

When you think of Pesach desserts, are you reminded of sawdust or cardboard? Join Professor Kelly Alexander as she guides us in making The Ultimate No-Fail Passover Chocolate Cake — the solution to the ongoing and pesky problem of Pesach desserts, one rich chocolate cake with several great variations. The recipe will be sent after registration!

Kelly Alexander is a longtime food writer and a professor of Food Studies in the American Studies Department at UNC-Chapel Hill. For many years, she was a writer and an editor at national food magazines including Saveur and Food & Wine. She is the winner of a James Beard Journalism award for her magazine writing. Her essays and articles have appeared in the New York Times, The New Republic, O: The Oprah Magazine, Newsweek, and many other publications. Kelly has written and co-written a number of cookbooks, including the New York Times bestseller Smokin’ with Myron Mixon, now in its eleventh printing. Alexander has been a regular contributor on the subject of food to NPR programs across the country. She holds a Ph.D. in cultural anthropology from Duke University and a bachelor’s degree in journalism from Northwestern University’s Medill School of Journalism. To join this session email sherri AT kehillahsynagogue.org.

Owning Up to Our History and Facing Our Future: A Covenant of Anti-Racism (open to Kehillah members only)

While we often describe our town as progressive, we know that racial injustices of disparity in educational opportunity, health, employment, income, housing and criminal justice persist in Chapel Hill and Orange County. We know, also, that in order to do the work of being anti-racist, we need to know and to own the history that brought us here.

Since early March, Rabbi Jen has been meeting weekly with an interfaith, interracial group of ministers to jointly plan responses to the COVID-19 pandemic. This same group is seeking ways for our communities to work together to confront racism and work toward racial justice. This minister forum will be meeting weekly for six weeks with scholar Chris Faison to learn the histories of race and racism in Chapel Hill that shape our present moment. Then each faith community will gather to watch and discuss these 6 recorded sessions. At the conclusion of the six sessions, we’ll join across our faith communities to meet with Chris Faison and forge future actions. The six sessions are listed below.

This introductory session will start by discussing the concept of individual racism during the town’s beginnings, while acknowledging the Indigenous American populations through the end of the Civil War.

The second session will consider the idea of interpersonal racism during the Reconstruction era through the lead up to World War I.

The third session will account for the abstraction of institutional racism from the World War I epoch through the time frame ahead of the landmark Brown decision.

The fifth session will regard the impression of antiracism in the 1980s and 1990s.

The sixth and final session will imagine the thought of being an antiracist from 2000 to present.

All faith communities come together for a moderated ZOOM discussion with Chris and to plan next steps.

For more information about our engaging Adult Education programs contact: sherri AT kehillahsynagogue.org